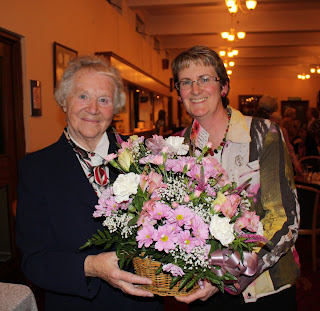 She then introduced her vice-captain, Fiona Scott of Bothwell Castle as follows:
Fiona tells me she has been a member of LLCGA since she was a young girl and has played for the County Team. She is a Past Captain and the current champion at Bothwell Castle Golf Club and was recently appointed Chairman (not sure about the political correctness of title in today’s society) of the West of Scotland Girls’ Golfing Association.
Fiona, I am pleased to have you as my Vice Captain. I believe you have much to offer Lanarkshire and I look forward to working with you during the next two years.
Installation of new Honorary President
As you know Margo’s term as President has ended and it is my pleasure to introduce Ann Prentice as our new Honorary President.
Ann is an Honorary member of Bothwell Castle Golf Club where she has been Ladies champion on numerous occasions. She is also a member of the Ladies’ Golf Club, Troon where she organised the Helen Holm Tournament for many years.
Ann was Captain of Lanarkshire from 1973-75, played for the County Team from 1963 – 1996 and was County champion in 1996.
In 1982 and 1983 she was Chairman of the Scottish Ladies’ Golfing Association and from 1985-1995 was the Scottish Representative on the LGU Standard Scratch Committee and a member of the LGU Training Committee.
Ladies, I am sure you will agree Ann is very worthy of this honour.
Posted by Jean at 16:50