Play suspended in Senior Home Internationals due to fog 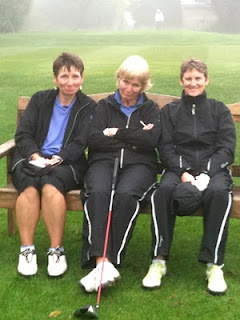 Mary Smith, Heather Anderson, May Hughes
Oh to be in Scotland now that summer's there!
Photograph courtesy of Fiona Cowan
Sea mist forced the suspension of play just after 4pm on Day 2 of the Senior Women's Home Internationals at Tramore Golf Club in southeast Ireland.
Play will restart at 9.15am on Thursday from the positions the players are at in their singles matches.
The foursomes will be dropped from the Day 3 programme which will be truncated to seven singles ties between England v Ireland and Wales v Scotland.
When play was halted today, this was the position :
SCOTLAND 0, ENGLAND 3
FOURSOMES
Mary Smith and Elaine Allison lost to Sue Dye and Caroline Marron 5 and 3.
Heather Anderson and May Hughes lost to Janet Melville and Felicity Christine 4 and 3.
Lorna Bennett and Karen Ballantyne lost to Bev New and Chris Quinn 2 holes.
SINGLES
Anderson v Christine. England 5 up after 12.
Smith v Marron. England 1 up after 13.
Allison v Rozalyn Adams. Scotland 2 up after 12.
Ballantyne v New. England 3 up after 12.
Bennett v Melville. All square after 11.
IRELAND v WALES
Ireland won the foursomes 2-1
SINGLES
Ireland up in three games, down in one and all square in the other.
Posted by Jean at 20:38

Kirsten Brown and her Dad, John, from Torrance House won the Category 2 (HCP 12-18) section of the SLGA Adult and Girls Foursomes at Auchterarder today with 37 stableford points.
Posted by Jean at 22:24 No comments:

On the 17th and 18th September 44 girls from all over Scotland travelled to St Andrews to compete in The University of St Andrews schoolgirls' golf Tournament 2011.
The competition comprised of a round on the Strathtyrum course and a round on the Jubilee course. In addition a university tour and short presentation about the Ladies Golf Club were given.
Alexandra Duffy won the S5/S6 Stableford Competition with 88points.
Heather Neilson was third with 74 points.
Emily Glencorse competed in the S3/S4 competition.
Well done girls.
Posted by Jean at 22:30 No comments:

Watch out for Susan and Jenny leading the singing at the Solheim Cup. Their video won the competition.
Well done girls. Hope you inspire the European Team to victory.
Posted by Jean at 23:30 No comments:

Rain halted play on the second day of the Scottish women's county golf championship finals at Dumfries and County Golf Club today (Saturday).
Only the foursomes were completed before the course became too wet. The singles ties will be played on Sunday morning with the final set of matches being decided over six singles each in the afternoon.
.Saturday's foursomes results:
MIDLOTHIAN lead PERTH and KINROSS 3-0
Karen Marshall and Wendy Nicholson bt Laura Walker and Eilidh Watson 2 and 1.
Kate McIntosh and Linda Bain bt Steph Crolla and Nicola Robertson 2 holes.
Gabrielle Macdonald and Kirsten Blackwood bt Jill Milne and Eve Muirhead 5 and 4.

To vote for Jenny And Susan's video, named the Solheim Submarines you need to be a member of facebook. If so go to the Solhim Cup Website, click on facebook , like then Chants for a Lifetime. They are doing well but need as many votes as possible.
Posted by Jean at 21:00 No comments:

Jenny and Susan want your vote

This is the song that Jenny and Susan are entering for the Solheim Cup Song competition. Please click on the photo to view the video.
They are looking for your vote. Details on how to vote will be given later.
Posted by Jean at 17:32 No comments:

The September Spoon at Cathkin Braes today was abandoned soon after some of the competitors had attempted to play in horrendous conditions.
Posted by Jean at 20:32 No comments:

Please remember to arrive early to be ready to play at least 20 minutes before your tee off time as there are on going changes to the draw.
Posted by Jean at 16:45 No comments: 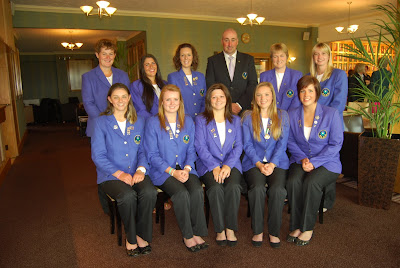 The Scottish Team - Courtesy of Colin Farquharson
click to enlarge
Title-holders Scotland's hopes of retaining the Women's Home Internationals title at Hillside Golf Club took a potentially fatal blow on another very windy and latterly very wet day at the Lancashire links.The Scots led Ireland by 2 points after the morning foursomes but the Irish took the singles by 3 points to finish as 5-4 winners.
Meanwhile, England, trailing 2-1 to Wales after the morning foursomes, won five of the six singles to win the match 6-3.
Scotland play England and Ireland play Wales on Day 2
Scotland looked set for a comfortable start to the defence of the title they won at Whitchurch (Cardiff) 12 months ago when Pamela Pretswell beat Lisa Maguire 5 and 4 to stretch the Scots' lunchtime lead to 3.5 to 0.5.
But it was a false dawn. Scotland did not win another singles tie.
Louise Coffey started the swing Ireland's way when she beat Louise Kenney 4 and 3,
Gillian O'Leary had a very good 3 and 1 win over Kelsey MacDonald and Charlene Reid chalked up a 5 and 4 win over former Scottish champion Megan Briggs.
That left the overall scoreline level at 3.5pt each with two matches to finish.
Ireland's Paula Grant, two down to Monifieth debutante Rebecca Wilson at the turn, fought back to gain a square match by winning the last hole.
And Ireland got the clinching victory point in the last match to finish with Emma O'Driscoll winning the 16th and 17th and halving the last for a come-from-behind one hole victory over Craigielaw's Jane Turner.
England came storming back in the singles against Wales, quickly making up their one-point deficit from the singles, winning five of the six afternoon ties.
A rampant England is bad news for Scotland's second match particularly after the morale blow they must have suffered with their collapse in the singles.
WOMEN'S HOME INTERNATIONALS
Hillside Golf Club, Lancashire
DAY 1
SCOTLAND 4, IRELAND 5
Foursomes (2.5-0.5)
Louise Kenney and Kelsey MacDonald beat Louise Coffey and Karen Delaney 4 and 3.
Pamela Pretswell and Alyson McKechin beat Gillian O'Leary and Charlene Reid 2 holes.
Megan Briggs and Eilidh Briggs halved with Lisa Maguire and Paula Grant
Singles (1.5-4.5)
Kenney lost to Coffey 4 and 3.
MacDonald lost to O'Leary 3 and 1.
Pretswell beat Maguire 5 and 4.
Megan Briggs lost to Reid 5 and 4.
Rebecca Wilson halved with Grant.
Turner lost to Emma O'Driscoll 1 hole
ENGLAND 6, WALES 3
Foursomes (1-2)
Georgia Hall and Bronte Law lost to Becky Harries and Amy Boulden 2 and 1.
Kelly Tidy and Holly Clyburn lost to Katie Bradbury and Chloe Williams 5 and 4.
Charlotte Ellis and Charlotte Wild bt Gemma Bradbury and Sam Birks 4 and 2.
Singles (5-1)
Lauren Taylor bt Williams 5 and 3.
Tidy beat Boulden 5 and 4.
Charley Hull bt Katie Bradbury 4 and 2.
Charlotte Ellis bt Gemma Bradbury 4 and 3
Clyburn beat Birks 6 and 5
Wild lost to Harries 5 and 3.
THURSDAY MATCHES
Wales v Ireland
England v Scotland
Posted by Jean at 22:43 No comments:

To view the draw for the spoon competition at Cathkin Braes GC on Sunday 11th September please click on the link below.
Please arrive early in case of changes to times. Please contact Jane Lees if you are unable to play and Jane or Jean's mobile on the day. Numbers are on the fixture card. 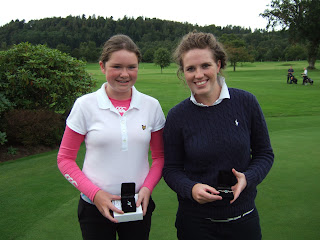 Leanne and Marsha-click to enlarge
Marsha Hull,Strathaven, won the Silver division of the SLGA Grand Medal Final at a sunny Crieff Golf Club today with a net 5 under par 69 which was 7 under the CSS of 76. Lorna Fury, Thornton, was second with a net 75 and Michelle Molloy, Cathkin Braes was third. All three qualified from the West Regional Qualifier at East Kilbride.
The winner of the Bronze Division was Leanne Wilson of Kelso ladies.Over 400 players started the season-long competition at club/area level and 25 qualifiers contested the Final at Crieff where the par was 74 and the CSS 76
PRIZEWINNERS
Par 74 CSS 76
Silver Division
Marsha Hull (Strathaven) (9) 69
Lorna Fury (Thornton) (3) 75
Michelle Molloy (Cathkin Braes) (14) 76.
Bronze Division
Leanne Wilson (Kelso Ladies) (14) 77
Kirsty Flockhart (Milnathort) (20) 78
Joanna Daley (Aberdour) (25) 80 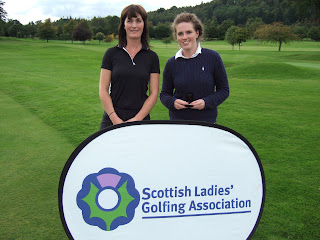 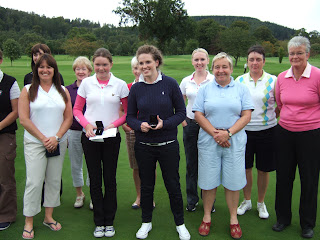 All prizewinners- click to enlarge
Posted by Jean at 21:33 No comments: