The closing date for the July Spoon at Cawder Golf Club, Keir Course, on Monday 9th July and for the Nancy's Cup for Juniors on the same course on the same day is Monday 2nd July. If you wish to play please contact Margaret Reid.
Posted by Jean at 23:11
Labels: Fixtures

In a very exciting final game at Ballumbie Castle, the West Girls were beaten by the East 2-1 to finish in runner up position.
Eva & Linsey lost
Hazel & Jillian lost
Emma & Rachel won
Congratulations to the East Girls, but well done to all of the above girls for representing the West of Scotland in such a competitive and sporting manner. You have been a credit to our Association.
Report by Allison Bell

Message from Captain Fiona Scott: Congratulations to Renfrewshire on winning the Intercounty matches at Cardross at the beginning of the week. We wish them well for the County Finals at Montrose in September.
On behalf of the team I would like to convey my thanks to the following people: Ann Prentice for her support and encouragement to the team both on and off the course, Jean Macintyre for ensuring both caddies and players were kept fed and watered and for being there to support me and ensure all went well during the three days, Ann Lloyd for organising a fantastic squad of caddies. Thank you  to them for giving up your time to caddy and for providing support to the players.
Finally to the members and friends who came along to support the team over the three days and for the many cards and text messages received thank you.
Fiona x
Posted by Jean at 21:30
Labels: Team /Jamboree

Report by Colin Farquarson
Scotland's hopes of providing a home winner of next week's British women's open amateur golf championship at Carnoustie have been dealt a body blow with the withdrawal of Curtis Cup Scot Pamela Pretswell
Pamela said today:
"I unfortunately picked up a vomiting bug on the Monday night at Nairn before the Curtis Cup match began.
"I had to stay in bed on the Tuesday and only played nine holes on the Wednesday. I have sadly not yet really fully recovered from this bug. It has not been nice at all. I have only just started eating full meals again. I hardly ate during the Curtis Cup, which was not exactly the best preparation.
"So I am really disappointed that I do not feel I am well enough again yet to play in the 'British.' I was especially looking forward to this year as it is at Carnoustie - one of my favourite courses after playing it in the Ricoh Women's British Open there last year."
The last Scottish player to win the Ladies British open amateur championship was Alison (Rose) Davidson in 1997 when the event was played at a Scottish venue - Cruden Bay. Alison from Stirling beat fellow Scot Mhairi McKay by 4 and 3 in the final.

Photographs by Jean Macintyre and May Hughes
Day 1

Posted by Jean at 13:14
Labels: Team/Jamboree 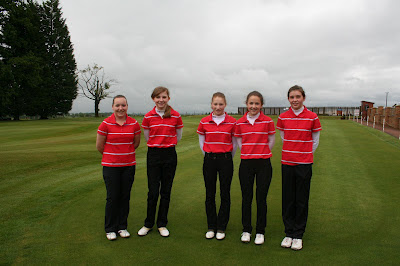 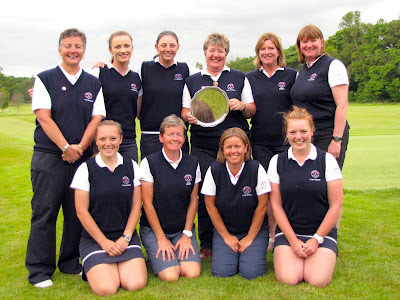 Renfrewshire team too strong for Lanarkshire

Posted by Jean at 19:19
Labels: Team/Jamboree

It's aWin for Lanarkshire

On the first day of the Inter County matches at Cardross lanarkshire defeated Ayrshire 61/2 to 21/2. Renfrewshire defeated D & A by the same score.
Three of the Lanarkshire games were won by two eagles and a birdie on the 18th.
Morning Foursomes
May Hughes & Lesley Lloyd bt Rachael McQueen & Connie Jaffrey 1 up
Susan McGrenaghan & Susan Wood halved with Lesley Hendry & Jenny Linklater
Fiona Norris & Ruth Rankin lost to Linzi Allan 1 down

Please arrive early in case of changes to times

Posted by Jean at 22:51
Labels: Fixtures

The West Ladies Inter County Foursomes Final was held today at Hamilton Golf Club. The rain stopped in time for the start of the competition and the competitors enjoyed the course which was in good condition.
Results:
Scratch
1. Donna Jackson & Liz Stewart (Renfrewshire) 75 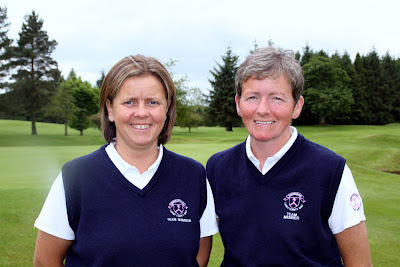 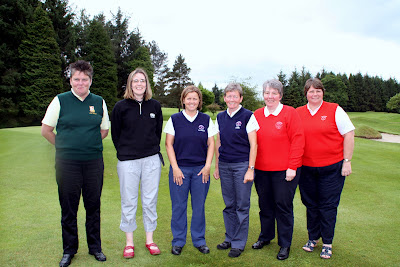 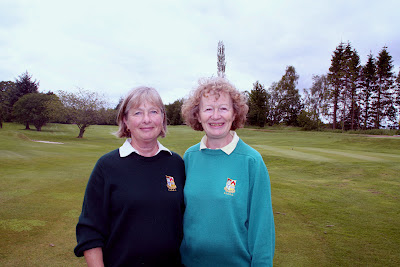 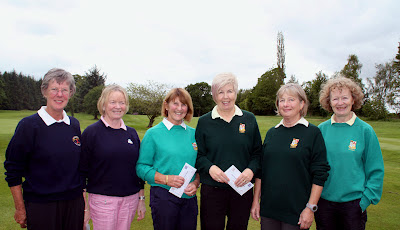 Click on photographs then f11 to see full size.
Posted by Jean at 20:09
Labels: Results 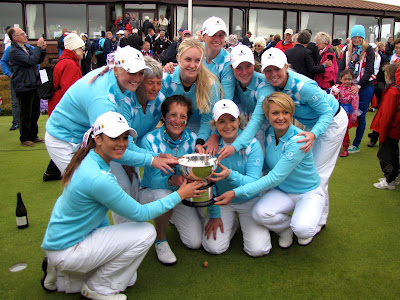 Great Britain and Ireland staged a brilliant last-day surge to win back the Curtis Cup at The Nairn Golf Club today. They finished victors by 10 1/2pt to 9 1/2.
Trailing by 1pt going into the final set of eight singles, captain Tegwen Matthews' team notched individual wins by Kelly Tidy, who was three down after six holes, Amy Boulden, Holly Clyburn, Charley Hull and the clincher from Stephanie Meadow.
For full report go to Kirkwood Golf. 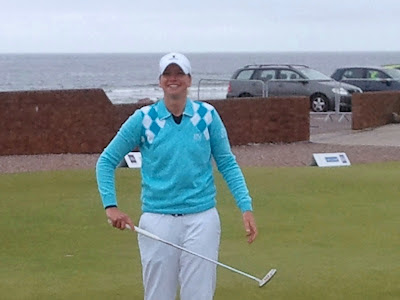 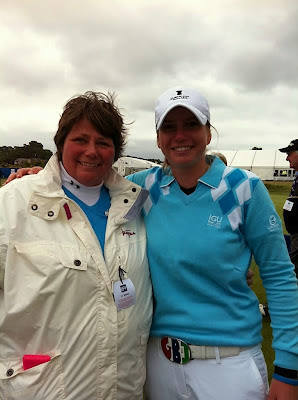 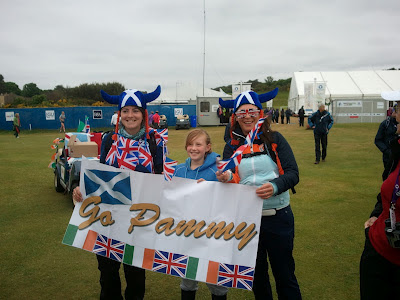 In the Northern Ladies Open Golf Championship over the Carnoustie Championship Course Pauline Warlow won the Gourlay Trophy for the best nett score with a net 74 which was 6 under the CSS.
Anne Lloyd was third in the handicap 2 section with a net 80.
Posted by Jean at 23:45
Labels: Club News

Great Britain and Ireland have given themselves an outstanding chance of winning the Curtis Cup for the first time since Killarney in 1996.
Team captain Tegwen Matthews' squad of eight players took this afternoon four-balls programme by 2 1/2 to 1/2pt after losing the morning foursomes 2-1.
That means that the United States' lead has been cut to a single point - 6 1/2-5 1/2 -with only Sunday's eight singles to come.
The Americans have won the biennial contest for the last seven times and they had looked to be well on their way to yet another victory until the tide started to turn on Day 2 - miserably wet in the morning but perfect golf conditions in the afternoon.
All the GB and I players were stars in the afternoon heroics but a special mention to the two winning partnerships.
Holly Clyburn and Kelly Tidy won the lead-off four-ball by one hole with three-under-par figures against Amy Anderson - her first defeat in four matches - and Emily Tubert.
Stephanie Meadow and Pamela Pretswell finished strongly to beat Erica Popson and Tiffany Lua by 2 and 1.
Pretswell played a career approach shot under pressure to grab a vital winning birdie at the 17th.
"I played a threequarters nine iron to about 2 to 2 1/2ft of the hole. But I have to confess that when I was standing over the putt it seemed to have stretched to twice that distance. I was glad to see the ball disappear into the hole," said Pamela."But what a great afternoon for all the GB and I team. We have come back from nowhere and we are all up for the Sunday singles."
Both winning GB and I partnerships had better-ball figures of three under par.
Lets not forget teenagers Leona Maguire and Bronte Law who halved with Brooke Pancake and Austin Ernst, two of America's top college players.
The attendance for the second day was 2,900, surprising in view of the bad weather in the morning which kept the early crowds down. But as the weather improved so the spectators made their way to the Nairn links.
It looks as if American captain Pat Cornett has loaded her "tail" with her best players - Lindy Duncan, Amy Anderson and Brooke Pancake.That might make it easier for GB and I to make up the deficit and establish a winning lead from the first five ties
Remember, the US as holders of the Curtis Cup need only to draw to retain the trophy. 10pt is the "magic number" for the Americans. They start the eight singles needing 3 1/2pt to reach that safety mark.
THE LINE-UP IS
GB and I names first
10.00 Kelly Tidy v Austin Ernst.
10.15 Amy Boulden v Emily Tubert
10.30 Holly Clyburn v Erica Popson.
10.45 Pamela Pretswell v Lisa McCloskey
11.00 Bronte Law v Tiffany Lua
11.15 Charley Hull v Lindy Duncan.
11.30 Stephanie Meadow v Amy Anderson.
11.45 Leona Maguire v Brooke Pancake 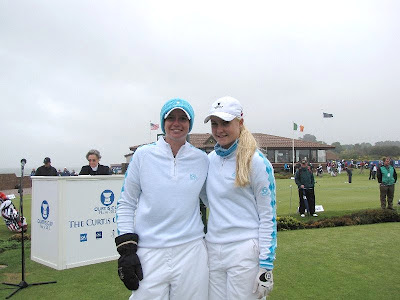 Fantastic crowds at Nairn today. Biggest first day for a while with 2690 people watching fantastic golf from both teams. Weekend crowds look set to break all records!

For LIve Scoring from the Curtis Cup click here
Posted by Jean at 17:54 No comments:
Labels: Curtis Cup/Pamela Pretswell

By COLIN FARQUHARSON
Colin@scottishgolfview.com
A surprise foursomes line-up announced by GB and I captain Tegwen Perkins for the opening morning's here at The Nairn Golf Club where we've had the best day's weather this week - Friday's forecast is for rain, and a lot of it.
Tegwen has left out Charley Hull and Pamela Pretswell. Both players had been expected to form the backone of the team over the three days and five sessions of play.
The matches are:
8am - Kelly Tidy and Amy Boulden v. Austin Ernst and Brooke Pancake.
8.12 - Holly Clyburn and Bronte Law v Amy Anderson and Tiffany Lua.
8.24 - Leona Maguire and Stephanie Meadow v Lindy Duncan and Lisa McCloskey.
The afternoon four-balls will be at 1pm, 1.15 and 1.30.
Posted by Jean at 22:57
Labels: Curtis Cup

Wishing GB & I all the best

LLCGA members wish Pamela Pretswell and her fellow team mates all the best in their quest to win the Curtis Cup. The Competition begins at Nairn Golf Club tomorrow.
Pamela made her Curtis Cup debut at Massachusetts two years ago when the home side won 12 ½ - 7 ½. Great Britain and Ireland last tasted victory in Killarney in 1996. “But I think we have a great chance this weekend,” said the lone Scot in the team. “We have all been playing well and produced some great wins. “Personally, I think it is a massive advantage for me to have been there before. You learn so much from a Curtis Cup and I have improved a lot since two years ago. “I have now finished university and am concentrating fully on golf. The swing changes I started making with my new coach, Alan Murdoch, last year are now really kicking in.”

The County Golf Open Meeting is being held this year at Castle Park Golf Club, Gifford, East Lothian, on Thursday 30 August. It is open to all County members with a CONGU handicap. Competitors may enter individually or in groups of two or three. Every effort will be made to allocate times as near as possible to those requested.
To download an entry form click here
Posted by Jean at 23:02
Labels: Fixtures

Closing date for the Scottish Girls' (Close) Amateur Championship is on Monday 11th June. It's not too late if you enter now! Entry form available here  entry form for Scottish Girls
Posted by Jean at 22:32
Labels: Juniors

Laura Murray,  the Scottish Champion, shares the lead with Katie Rule (Merlin) and Sweden's Jenny Haglund as they go into Sunday's final 36 holes over the Old Course after a 2 under par round of 73 on St Andrews New Course today.
Rachael Taylor had a 4 over par round of 79.

Posted by Jean at 23:14 No comments:
Labels: Club News

CLARE IS ONLY SCOT TO MAKE CUT

Clare Queen has made the cut in the Deloitte Ladies Open in Holland after rounds of 72 and 75 for a 147 total. The leader going into tomorrow's final round is Carlota Ciganda of Spain who lies on a 6 under par total of 138.
Posted by Jean at 22:54
Labels: Clare Queen
Newer Posts Older Posts Home
Subscribe to: Posts (Atom)