Today the Senior and Junior Squads had their third winter coaching session with Lesley Mackay at Playsport. It was a cold day but as usual Lesley did not give the girls time to get cold. It was an action packed two hours and an enjoyable time was had by all.
Posted by Jean at 21:30
Labels: Club News

Rachael Taylor moved up 20 places after a good round of 72 yesterday in the third round of the Portugese Open Amateur Championship. Unfortunately she missed the cut.
Posted by Jean at 17:29
Labels: Rachael Taylor

Rachael is competing in Portugal

Rachael Taylor is this week competing in the Portugese Open Amateur Championship at Montado Golf Resort, Lisbon. After the second round she is tied 96 after rounds of 81 and 89.
She will need a very good round tomorrow if she is going to make the third-round cut to the leading 40.
The leader is Rebecca Roeller of Germany. Leona Maguire of Ireland is in sixth place.
Posted by Jean at 20:42
Labels: Rachael Taylor 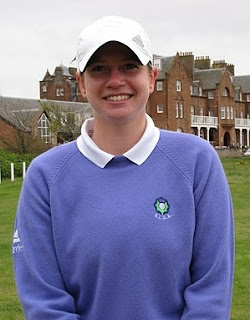 The Ladies’ Golf Union International Selection Panel has today named a Great Britain and Ireland preliminary squad of 12 players for the 37th Curtis Cup match against the United States at The Nairn Golf Club from June 8 to 10, 2012.
They are: 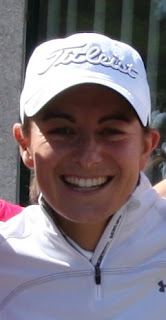 After the final round of the LET Qualifying School At La Manga Clare Queen finished in joint 22nd place after a 4 over par 77 today and so  she was well within the top 30 places that will earn LET membership in category 8a. Well done Clare.
Carly Booth finished tied for 29th place  but was beaten for the last qualifying place in a six player play off. She will only have limited playing rights next year.
England’s Jodi Ewart won by two strokes on 11 under par.
Posted by Jean at 17:26
Labels: Clare Queen

Only Clare Queen and Carly Booth of the five Scots in the field beat the fourth-round cut in the Ladies European Tour Final Qualifying School at La Manga, Spain today.
Clare is now lying in joint 10th place with a 1 over par total of 289 after a 2 over par 75 on the South Course today. The top 30 at the end of tomorrow's round will gain playing rights on the 2012 LET circuit.
Carly Booth  is T43 with a total of 296.
Unfortunately Pamela Pretswell missed the cut. She finished with a 2 over par 73 to rise to joint 70th along with Gemma Webster with a total of 302. Pamela was playing as an amateur.
Lynn Kenny finished tied 76th.. It is the first time she has lost her player's card since she gained LET membership some years ago.
England's Jodi Ewart is still leadingwith a total of 277.
Posted by Jean at 21:31
Labels: Clare Queen/Pamela Pretswell

After the third round of the European Ladies Qualifying School at La Manga Clare Queen lies in joint 6th position after a 3 over par 74 on the North Course today.
Pamela Pretswell  after a 4 over par 77 on the South Course today is now T76 as is Gemma Webster.
Carly Booth is now T40 and Lynn Kenny T49.
England's Jodi Ewart who is still leading is now on -13 after a 6 under par 67 on the South Course today.
After tomorrow's round the leading 50 and ties will proceed to the final round.
Posted by Jean at 21:23
Labels: Claire Queen/Pamela Pretswell

Clare Queen is now in joint 7th place after a 3 under par 70 over the more difficult South Course. She had 4 birdies and 1 bogey at the 15th. She is now on 4 under, 3 strokes behind the leader, England's Jodi Ewart.
Unfortunately Pamela Pretswell had a 5 over par 76 on the North Course today to fall back to T79. She is 5 strokes outside the top 50 at present but there are two more rounds before the cut to 50 and ties.
Carly Booth is now T52, Lynn Kenny is T56 and Gemma Webster T65.
Posted by Jean at 17:06
Labels: Claire Queen/Pamela Pretswell

At Drumpellier Golf Club today Jean Glass and Irene Cooper defeated Susan Wood and Jenny Potter.
Jennifer Wiles and Joyce McGowan are also through to the next round
On Saturday Marcia Stirling and Anne Mungall defeated Moray Meechin and Gail Campbell.
The second round is now complete. The closing date for the next round is 19 February.
Posted by Jean at 21:30
Labels: Results

Clare Queen made a very good start to the final qualifying lying tied 13th with a 1 under par 70 on the North Course, 4 shots behind the leader.
Pamela Pretswell also started well with a 3 over par 76 on the South Course leaving her tied 55 but only 1shot behind 39th place.
The other Scottish players in the Final Qualifying are Lynn Kenny who is T69, Carly Booth and Gemma Webster who are T80.
Posted by Jean at 16:19
Labels: Claire Queen/Pamela Pretswell

A number of members have so far failed to either renew their membership for 2012 or informed the Treasurer that they do not intend to do so.
Please send the appropriate fee or notification of resignation to the treasurer, Pam Rice, as soon as possible.
Posted by Jean at 23:24
Labels: Club News

Enid King and Ann Roulston are through to the next round.
Posted by Jean at 16:46
Labels: Results

Clare and Pamela are through to final qualifying

Congratulations to Clare and Pamela who are among 72 players who have graduated to the Final Stage of The European Ladies Qualifying School at La Manga.
Clare finished tied for 10th in group A after a final round 2 over par 75 on the South Course giving her a 5 over par total of 293.
Pamela finished tied 18th in group B after a 3 over par 74 on the North Course giving her an 8 over par final total of 296.
The cut in group A came at +11 while that in group B was at +12.
A 90-hole test now awaits 101 players who will play the Final Stage at La Manga Club in Cartagena, Murcia, Spain, from Sunday.
The field will play both the North and South Courses for the first four rounds with a cut to the leading 50 players and ties after 72 holes. The final round, which will determine exemption categories for the 2012 season, will then be played on the South course.
At stake is a place on The 2012 Ladies European Tour for the cream of the crop. The players will all be eyeing a place in the top 30 to secure eligibility for LET Membership in Category 8a.
After the final round, players who made the cut but finished in position 31 or below will be ranked according to score and will be eligible for LET Membership in Category 9b.
Players who fail to make the 72 hole cut will be eligible for Category 11a Membership of the Ladies European Tour for the 2012 season.
We wish Clare and Pamela well in the next stage.
Posted by Jean at 19:35
Labels: Clare Queen/Pamela Pretswell

After three rounds of the European Ladies Qualifying School At La Manga Clare Queen is lying joint 10th in Group A after a two-over-par 73 in the third round at La Manga North. She is on three-over-par 218 - five shots off the pace.
Pamela Pretswell is joint 17th in Group B after a two-over-par 75 at the more difficult La Manga South course.
After tomorrow's fourth round the top 35 in each group will proceed to final qualifying.
Posted by Jean at 23:30
Labels: Clare Queen/Pamela Pretswell

At Strathaven Golf Club today Pauline Warlow and Carol McKinnon defeated Jean Macintyre and Irene Nisbet.
Remember the closing date for this round is 15th january i.e. next Sunday.
Posted by Jean at 17:14
Labels: Results

Clare Qeen and Pamela Pretswell are playing in the Ladies European Tour Qualifying School's two-part programme at La Manga, Spain from January 8 to 19, Clare to retain her tour card and Pamela to gain her's for the first time. Pamela is keeping her options open by retaining her amateur status.
The prequalifying from 8-11 Jan consists of 72 holes. The Qualifying is over 90 holes  from 15-19 Jan. There is a cut to the leading 50 and ties after four rounds. In the end the top 30 will gain playing rights for 2012.
We wish them both well.
Posted by Jean at 00:13
Labels: Claire Queen/Pamela Pretswell