To view the times for the Effective Practice sessions at Playsport  click on the link below.
If you can no longer attend or wish to change your time please contact Fiona Scott.
Effective Practice Times
Posted by Jean at 21:32
Labels: Club News

On a very windy day at Baton Rouge, Louisiana, Rachael Taylor finished with a last round of 81 to finish tied for 23rd in the LSU Classic.
The winner was  American Curtis Cup player Emily Tubert on level par, 216.
Posted by Jean at 17:29
Labels: Club News

Rachael Taylor, a freshman student at North Carolina State University, is lying joint13th in a field of 79 players with one round to go in the LSU Classic at the  University Golf Club, Baton Rouge in Louisiana.Rachael had rounds of 75 and 73 for four-over-par 148 over a par-72, 6305yd course.
Four players, including two USA Curtis Cup team players, Erica Popson (Tennessee) (71-73) and Emily Tubert (Arkansas) (72-72) are sharing the lead on 144.
Posted by Jean at 23:51
Labels: Club News

In spite of some very poor weather conditions  in parts of the county there was a very good turn out at the Coffee Morning held at Bothwell Castle Golf Club yesterday where we all had a chance to catch up with friends before the start of the season which starts with the Championship in three and a half weeks time ( closing date for entries 8 April).
As well as being an enjoyable social event  it raised the magnificent sum of  £2167 for our funds.
In addition a raffle was held for the prize of a framed Curtis Cup, 2012 , programme signed by the team and a framed Curtis Cup flag signed by  Pamela Pretswell. (See picture in photographs below). This raffle will continue at events throughout the year and will be drawn at the AGM in November The proceeds from this raffle will be donated to Breakthrough Breast Cancer in memory of Sue Turner who, before her death, was due to be Manager of last year's Curtis Cup Team.
Captain Fiona and the committee extend many thanks to all those who attended, to those who supported it financially in spite of being unable to attend and to those who so generously donated raffle prizes. 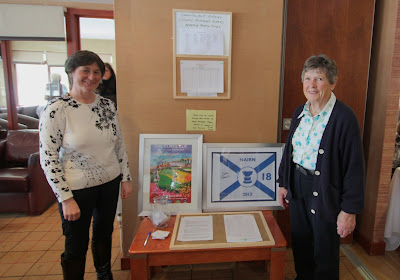 To view more photographs please click on the link below.
photographs of Coffee Morning
Posted by Jean at 13:26
Labels: Club News

Congratulations to Fiona Norris, Elaine Cuthill and Susan Wood who have been appointed captains for the European Ladies' Team Championship, the European Girls' Team Championship and the under 16s' Championship respectively.
From the SLGA Website:
Following two seasons in charge of the Home International team, Fiona Norris (Hamilton) has been named Captain of the Scottish side for the European Championships at Fulford in York in July.
“It is good to be involved with Scotland again this year,” said the former international player. “I am hoping to visit Fulford very soon. I know it is a wonderful championship course and has held many big tournaments in the past."
“Our team will be certainly ready for the challenge and I am sure it will be an advantage that the Championships are taking place in the British Isles.  Scotland has many talented players and we will be aiming to put in a strong performance against the very best in Europe.”
Karen Marshall (Baberton) takes over as Captain for the Home Internationals. The Scottish team will have home advantage at Scotscraig from September 11-13. Scotland last hosted the event at Irvine in 2009 when the side finished runners-up to Wales. Scotland went on to win the title at Whitchurch the following season.
Elaine Cuthill (Lanark) retains Captaincy of the European Girls’ team, while Laura Walker (Nairn Dunbar) is the new skipper of the Girls’ Home International team.
Susan Wood (Drumpellier) takes over as Captain of the Scottish Under-16 team, while Helen Faulds (Douglas Park) extends her period at the helm for the Senior International matches and she will also Captain Scotland at the European Senior Ladies’ Team Championship.
Posted by Jean at 23:50
Labels: Club News

The  Coffee Morning will be held at Bothwell Castle Golf Club on Saturday 23 March. Tickets, cost £5, can be obtained from committee members. Come along and enjoy some delicious food and participate in the raffle which has some great prizes. Again this year you can place your tickets on the prizes you wish to win. Here are some of the prizes: 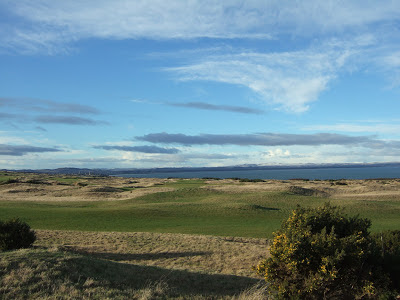 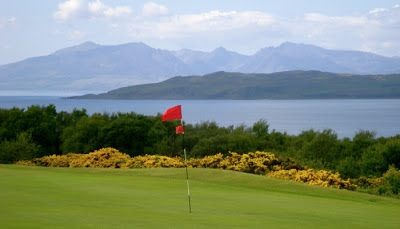 2 tickets for Andrea Bocelli concert at the Hydro, Glasgow + a meal.
Course of lessons with Lesley Mackay at Playsport,
A large basket of goodies, champagne, golf visors and more.
Posted by Jean at 20:07
Labels: Club News

In true winter weather today Gail Campbell and Moray Meekin defeated Pauline Warlow and Carol McKinnon and will now play May Hughes ( Cathkin Braes) and Paula McArthur in the final.
Posted by Jean at 19:48
Labels: Results

To download an Entry Form for the West of Scotland Championship at West Kilbride Golf Club on Sunday 5 May 2013 please click on the link below.This year it is an 18 hole competition. Handicap limit is 15.
West of Scotland Entry Form
Posted by Jean at 22:26
Labels: Fixtures
Newer Posts Older Posts Home
Subscribe to: Posts (Atom)