Our Senior and Junior squads had their first training session with Lesley MacKay at Playsport today. It was a bright and sunny day but very cold.

Lesley got us started with some warm-up exercises, followed by skills tests and work on the pre-shot routine. Despite the cold conditions everyone was very enthusiastic and enjoyed the day. We all left with various things to think about and work on before the next session at the end of February!
Posted by Lesley at 22:57 No comments:

Pamela Pretswell, playing in her first competition since last September's home internationals, admitted before she left for Portugal that a combination of studies for exams at Glasgow University and the severity of the Scottish winter which closed most courses for a long spell, had raised her enthusiasm for a game of golf but left her desperately short of match-practice. In the event, Pretswell's scores highlighted that deficiency. She was bang in contention with a sub-par opening round of 71 and then gradually slipped down the field, unable to produce consistent good golf because she was simply too rusty. Subsequent rounds of 74, 77 and 74 gave her a total of eight-over-par 296. The winner with a total of 283 was Anna Arrese of Spain with Lara Katzy on 284 in second place.
Posted by Jean at 20:26 No comments:

Pamela drops back to 10th place

Pamela Pretswell had a round of 77 today in the Portuguese Amateur Open and now lies in 10th place, 10 shots behind the leader, Lara Katzy going into the final round tomorrow.
Posted by Jean at 22:04 No comments:

Pamela has a second round 74 in the "Portuguese"

With a 145 (71,74) total Pamela lies in fifth place, 4 shots behind the leader, Lara Katzy of Germany, in the Portuguese Open Amateur Championship.
Posted by Jean at 22:17 No comments:

Pamela has made a good start to the Portuguese Open Amateur Championship with a one under par 71 to lie in joint second place, one stroke behind Holly Cyburn (Woodhall Spa).
Posted by Jean at 22:45 No comments:

Pamela playing in the "Portuguese"

Pamela Pretswell will be playing in the Portuguese Ladies Open Amateur Championship which takes place over the Oceanico O'Connor Junior Course at Amendoeira Golf Resort on Thursday. She and Laura Murray (Alford) are the only two Scottish players in the field. For a fuller report go to the Kirkwood website.
Posted by Jean at 22:39 No comments:

In the last second round tie , due to illness, Susan Wood and Elaine Cuthill have been given a walkover.
Posted by Jean at 21:26 No comments:

In the second round of the Winter Foursomes one tie remains to be completed and due to the prolonged spell of bad weather some extra time will be given for its completion. At the moment there will be no extension to the closing dates of the remaining rounds.
Posted by Jean at 21:52 No comments:

At the SLGA AGM on Saturday the new President Emma Wilson, who comes originally from Lanark but now lives in Fife, was elected. For photographs and a full report visit the West of Scotland website.
Posted by Jean at 21:16 No comments:

East Kilbride Clubhouse after the Fire 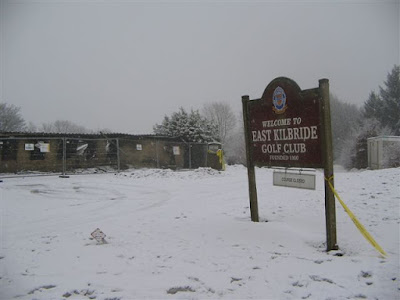 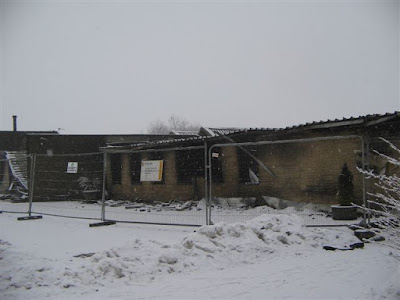 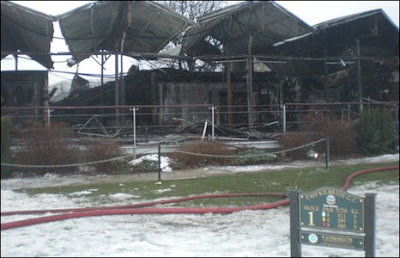 Thank you to Joyce Chalmers for these photographs. Joyce said, " I went to see the club - what was left- yesterday. It is indeed a sorry sight - total devastation. I have been a member since that clubhouse opened - I joined as a junior when I was 12. Lots of memories - and my name on a few cups which are all destroyed!!! However it will all be sorted in time - and we are no where near the tragedy that is taking place in Haiti!
See you in the spring / summer in our porta- cabins!" 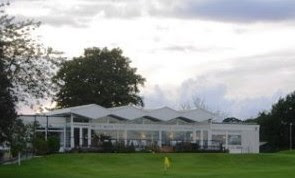 May I express, on behalf of LLCGA members, much sympathy to all East Kilbride Golf Club members at the loss of their clubhouse last night.
The following information was taken from the STV website. "Strathclyde Fire and Rescue said they had been called around 6pm on Tuesday night to deal with a blaze at East Kilbride Golf Club, located in the town’s Chapelside Road. There are no reports of casualties.
A spokesperson from Strathclyde Fire and Rescue stated: "The initial appliances and crews attending were faced with an established and rapidly developing fire within the clubhouse premises. Due to the severity of the fire and very limited water supplies, an early call for further assistance and appliances was made."
At least eight fire appliances were in attendance in the blaze. The fire service added that their efforts to deal with the blaze were "severely hampered by poor water supplies, strong winds and rapid hidden fire spread through roof voids".
An investigation has now been launched to determine the cause of the blaze.
Firefighters are expected to be in attendance for some time, the spokesperson concluded.
Posted by Jean at 09:19 No comments:

Am very sorry to report that Fire crews are tackling a large blaze at East Kilbride Golf Club.
Eight fire pumps and special appliances are at the scene of East Kilbride Golf Club, in the Nerston area, said Strathclyde Fire & Rescue.
A spokesperson for the fire service said there is no reports of any casualties at the club.
Posted by Jean at 23:02 No comments:

Changes to the Decisions on the Rules of Golf

From January 1, no relief allowed from divot hole or repaired divot hole.

As usual, half way through the four-year life of an edition of The Rules of Golf, the R&A has published a new Decisions Book. This contains some 30 new decisions and amended versions of further 49 revised decisions which come into effect on January 1, 2010.Many of these merit detailed consideration only by serious students of the rules, budding referees and quiz masters and require a thorough knowledge to understand their complexity. However, there is one change that will require immediate action by many club committees and the awareness of all golfers.New decision 33-8/34 now removes the authority for a committee to make a local rule “providing relief without penalty from a divot hole or a repaired divot hole (i.e. filled with sand or seed mix).”
At least half the golf clubs in Scotland have such a local rule and these must be withdrawn immediately before any qualifying competitions for handicap purposes can be played.Such a local rule contravenes Rule 13-1 which states that a ball must be played as it lies and has generally not been used in professional and major amateur competitions.It is often mistakenly believed that this rule protects the golf course. If relief is given or indeed demanded from a seeded divot hole, a second divot hole is created and requires repair, leaving two seeded divots holes.If the ball is played from the original hole it may require repair but only one hole remains.
Posted by Jean at 15:57 No comments: