In a second round tie Anne Pardoe and Lauren D'Ambrosio defeated Marcia Stirling and Anne Mungall.
Due to a withdrawal Pauline Warlow and Carol McKinnon are through to the third round.
Remember to check the sidebar of the website to check the up to date results table.
Posted by Jean at 21:35
Labels: Results

The notice of the forthcoming AGM on Monday 18 November at 7.30pm will be posted to members shortly.
In order to save costs copies of the minutes of last year's AGM will not be sent to individual members unless a request is made to the secretary. To view these minutes please click on the link below.
Minutes of 2012 AGM
There will be two vacancies on committee, to fill which the committee intend to propose Fiona Norris and Joan Anderson. Any other nominations for committee should be sent in writing to the Secretary by 11th November.
Posted by Jean at 15:04
Labels: Club News

The annual dinner for the team, caddies and committee was held on Friday evening at Strathaven Golf Club where they enjoyed good food and good fun. To view photographs taken on the night click on the link below and then click on slideshow.
photographs
Posted by Jean at 22:30
Labels: Club News

In a second round tie Margaret Porteous and Winnie Cossar defeated Lesley Watson and Julie Kelly.
Posted by Jean at 23:22
Labels: Results

Rachael has her lowest round on US College Circuit so far

Rachael Taylor, a student at North Carolina State University, shot her lowest round so far on the US women's college golf circuit - a par-matching 72 over a 6,379yd course, and finished joint 36th in a star-studded field of 96 at the Tar Heel Invitational tournament over the Chapel Hill Course, North Carolina.
Rachael's earlier rounds were 73 and 77 and her final total of six-over-par 222 saw her finished 15 shots behind the impressive winner by two shots, Ashlan Ramsay (Clemson) who had scores of 68, 69 and 70 for a nine-under total of 207.
Posted by Jean at 16:00
Labels: Rachael Taylor

In a first round tie Anne Pardoe and Lauren D'Ambrosio beat Marjorie Seymour and Dorothy McTaggart by 1 hole.
Due to an injury to an opponent Margaret Porteous and Winnie Cossar are through to the next round.
Posted by Jean at 22:53
Labels: Results

Kirsten is Runner Up in West Girls Championship 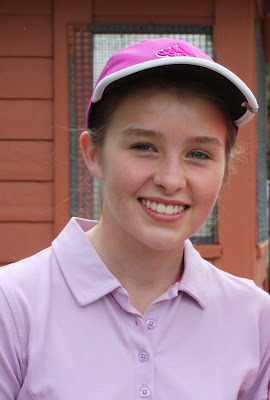 In the West of Scotland Girls Championship at Troon Portland today Kirsten Brown defeated Katie McGarvie in the semi final but was defeated by Connie Jaffrey, the Scottish Girls Champion, in the final.
Posted by Jean at 21:57
Labels: Juniors

In a first round match at Cathkin Braes today Lesley Watson and Julie Kelly defeated Lesley Neil and Elaine Sinclair.
Remember that all first round matches are to be completed by 12th October.
Posted by Jean at 21:22
Labels: Results

Ireland drew 4-4 with England today meaning that they both had 2 wins and a draw. Ireland, however, won more individual games.
Scotland lost 6-2 to Wales.
Foursomes: 0-3
F De Vries and S Wood lost to A Lewis and J Rees 6 and 5.
L Bennett and M Smith lost to J Doleman and P Fernon 1 hole.
A Glennie and A Bartlett lost to D Richards and V Thomas 3 and 3.
Singles: 2-3
Glennie lost to Rees 3 and 2.
Wood bt Doleman 3 and 2.
M Hughes lost to Thomas 3 and 2.
Smith bt Richards 2 and 1.
Bennett lost to Lewis 3 and 2.