To view the draws for Colville Park on 7th July please click below. Please arrive early in case of changes to times.

Posted by Jean at 21:56 No comments:
Labels: Fixtures

Posted by Jean at 08:36 No comments:
Labels: Jamboree

The west inter county matches are over for another year. It was a privilege to host the event in the centenary year of all four counties. We had exceptional weather over the three days and the course at Strathaven was presented to us in fantastic condition. Stephen Hunter the head green keeper certainly concentrated our minds. He either has a wicked sense of humour or a sadistic streak, I'll leave everyone to make up their own mind on that one. It was a test for all the players but one i know they relished and enjoyed.
I would like to take this opportunity to first of all congratulate Renfrewshire on retaining the salver and wish them all the very best for the finals at Baberton in September, hopefully they can bring the county shield back to the west. On behalf of the team i would also like to thank all the members of Lanarkshire who took the time to come to Strathaven to offer support and encouragement. Unfortunately it was not one of our better weeks and i know the team are disappointed with their performance but i cannot fault their effort and 100% commitment.
My thanks also to Vice Captain Lesley (the star of the week with the most points on the board) for support and assistance not only this week but in the weeks leading up to the jamboree. To Liz Lees who does a fantastic job organising caddies and many other tasks behind the scenes. Our caddies are a great bunch of individuals who make the occasion enjoyable with their banter and great sense of humour. I would also like to acknowledge the contributions by Margo Bauer, Pam Rice, Margaret Noblett and Anne Lloyd. There really was a lot of work to be done and they could not have been more helpful. My thanks also to Jean Cameron for refereeing duties, to Irene Nisbet for the flower displays at the entrance and around the first tee, to Jenifer Wiles for the flower arrangements in the clubhouse, to Marion Porter the lady captain Strathaven for support and good humour and to the members of Strathaven for allowing us to take over their locker room for the week. To Carol Fell of Renfrewshire for photographs and to Isabel Crawford our non opinionated hard working west division secretary for her usual dry wit. And last but not least to Jean Macintyre who rises to every challenge and has organisational skills second to none. She really is worth her weight in gold and a great asset to our association.
We maybe didn't win, but everything that was within our control was carried out without a hitch -- even down to the weather. I hope the prayer mat continues to work until the end of the season.

May Hughes
LLCGA Captain
Posted by May at 15:19 No comments:
Labels: Jamboree

Congratulations to Renfrewshire, winners of the West Inter County Matches for the second year in a row. Today they defeated D&A 61/2 to 2 1/2. They will now go forward to the County Finals at Baberton in September.
The Lanarkshire team fought well but were narrowly beaten by 5 to 4 by Ayrshire to finish last.
The final results were: Renfrewshire 6; D&A 4; Ayrshire 2; Lanarkshire 0
To view detailed results for today click below.

Posted by Jean at 22:15 No comments:
Labels: Jamboree

Renfrewshire continued their good form today defeating Ayrshire by 71/2 to 1 1/2 at a very warm and sunny Strathaven Golf Course which was in excellent condition . In the other match Dunbarton and Argyll defeated Lanarkshire by 7 games to 2, Joanna Scott chipping in at the last to half the last game. Click below to view results.
Posted by Jean at 18:25 No comments:
Labels: Jamboree 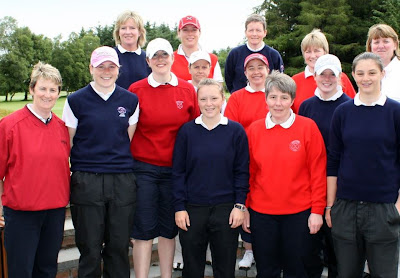 The Lanarkshire Team for the forthcoming West Inter County Matches at Strathaven Golf Club on Monday 22nd -Wednesday 24th June 2009 is as follows :

The weather forecast for the three days is reasonably good and i hope to see lots of red jerseys throughout the three days of competition. We look forward to some good golf and i know our team will rise to the occasion and will be encouraged by your support.
Posted by May at 09:18 No comments:
Labels: Team

May Hughes , Pat Hutton, Janice Paterson and Anne Prentice played in the West Vets' team which was defeated by East Vets' over Gullane No. 1 Course yesterday. For full report see the West Vets' website.
Posted by Jean at 23:19 No comments:
Labels: Club News

Ayrshire were the winners of the Junior Inter County Matches at Clober Golf Club today , winning the Kennedy Salver, Renfrewshire were second with Lanarkshire third. The morning foursomes were reduced to 9 holes due to torrential rain flooding the greens. The afternoon singles teed off in heavy rain also but fortunately it cleared soon afterwards and the games were completed.
The Lanarkshire team of Lisa Bathgate, Nicole Benson, Emma Caddow, Laura D'Ambrosio, Abigail Gliksten, Nicola McLuckie and Nicole Muir played well and enjoyed their games after the weather improved.
Result: Ayrshire 71/2 Renfrewshire 4 Lanarkshire 31/2 Dunbarton & Argyll 3

Posted by Jean at 22:07 No comments:
Labels: Juniors

Our new sweaters and slipovers have now arrived bearing our up to date logo. They are available in all sizes and if you wish to purchase one please contact Liz Lees. The price is £35 for sweater and £25 for slipover. This cost may increase when we re-order so you may wish to obtain one as soon as possible. In any case the current ones are so last century. Liz will bring a selection to the jamboree at Strathaven next week.
Posted by May at 08:16 No comments:
Labels: LLCGA clothing 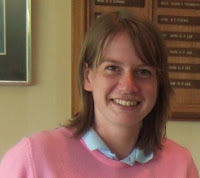 Many congratulations to Pamela Pretswell, Bothwell Castle, who has been selected for the Great Britain and Ireland team for the Vagliano Trophy Match against the Continent of Europe at Hamburg Golf Club on Friday and Saturday 24th and 25th July. This is well deserved for all her good play in the West, Scottish and British championships this year.
As preparation for this event the GB & I team have been invited to play in the AIB Ladies Irish Open, a Ladies European Tour Event, at Portmarnock Hotel and Golf Links from June 26 to 28. We wish her well.
Posted by Jean at 21:40 No comments:
Labels: Pamela Pretswell

The centenary texas scramble competition at Bothwell Castle GC on Monday 10th August is proving to be very popular and there are now only a very few spaces left. If you have not already entered and wish to do so you should contact me as soon as possible.
Posted by Jean at 23:03 No comments:
Labels: Fixtures

Pamela Pretswell lost to Laura Collin at the 20th hole in the third round of the British Open Amateur Championship at Royal St David's Golf Club today. Pamela was never down in the match and was 1 up after 17 but lost the 18th and then the second extra hole.
Posted by Jean at 22:25 No comments:
Labels: Pamela Pretswell

Pamela Pretswell is the only Scot to reach the last 16 of the British Open Amateur Championship at Royal St David's Golf Club. In the first round she defeated Annia Ruscio (Italy) 4&2 and in the second round Myrte Elkenaar (Netherlands) 2&1. In tomorrow's third round she will play Laura Collin (John O'Gaunt). We wish her well.
Posted by Jean at 00:06 No comments:
Labels: Pamela Pretswell

Posted by Jean at 20:02 No comments:
Labels: Results

The result of the friendly Junior Match v Ayrshire at West Kilbride Golf Club yesterday was Ayrshire 4.5 Lanarkshire 1.5. The weather was sunny but windy. The girls had an enjoyable time and played some very good golf.

Posted by Jean at 21:02 No comments:
Labels: Juniors

Spain's Tania Elosegui was the winner on a rainy day in The Netherlands with a 9 under par total.Clare finished tied for 37th on 3 over par.
Posted by Jean at 20:49 No comments:
Labels: European Tour

Clare is tied for 9th in the Netherlands 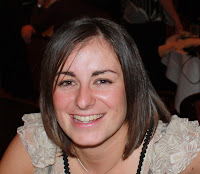 Clare Queen is tied for 9th place after the second round of the ABN AMRO Ladies Open at Eindhoven Golf Club with a 1 under par total of 143 (69,74). She is 7 shots behind the leader, Diana Luna of Italy.
Posted by Jean at 21:12 No comments:
Labels: European Tour

As intimated in the fixture card South Lanarkshire Council are giving a Civic Reception to LLCGA members in recognition of the centenary of our association. This will take place on Thursday 24 September 2009 in Committee Room 1, Council Offices, Hamilton at 7.00pm for 7.15pm. The format for the evening will be a drinks reception, photographs, civic welcome followed by a meal, short formal speeches and presentation of a civic gift. The evening will finish at 9.30pm approximately.
If you wish to attend please sign the appropriate sheet on the notice board or contact May Hughes or Jean Macintyre. The closing date for entries is 30th June. Please note that numbers are limited and places will be allocated on a first come first served basis.
Posted by Jean at 22:32 No comments:
Labels: Centenary

Please click below to view draw for the June Spoon at Wishaw.