Janice through to semi final

Janice and May through to Quarter Finals

Qualification for Scottish Seniors goes to a play off 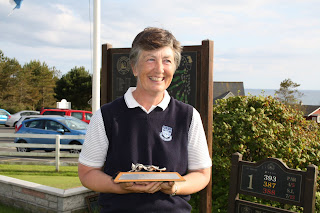 May in joint second in Scottish Senior Championship

CLICK HERE TO GET YOUR LIVE SCORING FROM THE SCOTTISH SENIORS CHAMPIONSHIP AT DUNSKEY PORTPATRICK
Posted by Carol at 09:13 No comments:

The Continent of Europe team won the Vagliano Trophy today for the third time in a row in the biennial women's amateur international golf match over two days at Royal Porthcawl's windswept links in South Wales .
They made light of the bad weather – a very strong, cool wind and intermittent rain –to beat Great Britain and Ireland 15 ½-8 ½.
Second-day results (GB and I players first)
Foursomes (2-2)
K Tidy and A Boulden beat A Bonetti and M Gidali 3 and 1.
K MacDonald and L Kenney lost to M Silva and C Hedberg 2 and 1.
P Pretswell and S Meadow lost to S Popov and L Katzy 1 hole.
Leona Maguire and D McVreigh beat M Sagstgromn and T Koelbaek 6 and 4
Singles (2-6)
H Clyburn lost to Silva 1 hole.
Maguire beat C Boutier 3 and 1.
MacDonald lost to Bonetti 3 and 2.
Meadow lost to Koelbaek 1 hole.
Tidy lost to Katzy 5 and 4.
Boulden lost to Hedberg 2 and 1.
P Pretswell beat Sagstrom 2 holes.
McVeigh lost to Popov 3 and 1.
To read the full report go to the Gillian Kirkwood Website
Posted by Jean at 21:44 No comments:

Congratulations to Ayrshire on winning the Inter County Matches at Barassie this week. We wish you all the very best at the County Finals in September.

On behalf of the Lanarkshire team I would like to thank:

Ann Prentice our Honorary President who spent many hours on the course offering support and encouragement to all the players.

Jean Macintyre for ensuring food and drinks were available for players and caddies, for the many photographs taken over the 3 days and various other tasks leading up to the matches.

Anne Lloyd and her enthusiastic group of caddies. The caddies were superb and despite the awful weather on Tuesday and Wednesday they did a fantastic job keeping the players and their clubs dry. Thank you ladies!

Finally, to the members and friends who came to support the team over the 3 days and for the many cards and messages received.

Unfortunately results did not go our way this week but hopefully they will one day soon.

Lesley
Posted by Lesley at 21:17 No comments:

Click to enlarge.
Posted by Jean at 21:23 No comments:

Lanarkshire win against D&A on Day 2 of the Jamboree

Ayrshire beat last year's Scottish county champions Renfrewshire 5-4 today on Day 2 of the West Division women's inter-county golf team championship at Kilmarnock Barassie.
Lanarkshire, who were well beaten by Renfrewshire on Day 1, kept their hopes alive by beating Dunbartonshire 7-2.
Lanarkshire lost the top foursome but won the other two to lead 2-1 going into the singles in which they took five of the six available points.
In the other match, Lanarkshire beat Dunbartonshire and Argyll 7-2.
Going into the final day, Ayrshire have 2pt, Lanarkshire 1, Renfrewshire 1pt and Dunbartonshire and Argyll 0pt. Ayrshire play Lanarkshire in their final match. It should be an exciting finish to see who goes forward to the Scottish county finals in September as West Division champions.
Day 2 results
AYRSHIRE 5, RENFREWSHIRE 4
Foursomes (2-1)
L Allan and M McKay lost to M Briggs and E Briggs 3 and 2.
J Linklater and L Hendry bt A McKechin and D Jackson 4 and 2.
R McQueen and C Malcolm bt C Whyte and G Kyle 2 and 1.
Singles (3-3)
McQueen lost to M Briggs 6 and 5.
A Glennie lost to McKechin 4 and 2.
Allan bt G McGinlay 1 hole.
Malcolm bt L Stewart 3 and 2.
Linklater bt Whyte 6 and 5.
Hendry lost to E Briggs 7 and 5.
LANARKSHIRE 7, DUNBARTONSHIRE and ARGYLL 2
Foursomes (2-1)
R Taylor and A Devine lost to N Ferguson and J Meldrum 2 and 1.
S Wood and J Potter bt A Laing and L McGeachy 5 and 4.
L Lloyd and F Scott bt S Cadden and L Campbell 1 hole.
Singles (5-1)
Taylor lost to Ferguson 1 hole.
Wood bt G Smith 4 and 3.
E Caddow bt Meldrum 2 and 1.
Devine bt Laing 3 and 2.
Potter bt L McColl 4 and 3.
Lloyd bt Campbell 4 and 3.
HOW THEY STAND
Ayrshire 2 wins, Renfrewshire 1, Lanarkshire 1 win, Dunbartonshire and Argyll 0 wins.
FINAL MATCHES
Ayrshire v Lanarkshire
Dunbartonshire and Argyll v Renfrewshire
Posted by Carol at 23:18 No comments:

Lanarkshire lose to Renfrewshire on Day 1 of Jamboree


CLICK HERE TO SEE SOME PICTURES FROM THE DAY

Renfrewshire made an impressive start to the West Division women's inter-county golf team championship with a 7 1/2-1 /2 win over Lanarkshire at Kilmarnock Barrassie GC.
The Briggs sisters were in top form for Renfrewshire. They teamed up an 8 and 7 win over Rachael Taylor and Scotland team captain Fiona Norris in the foursomes and then they won the Nos 1 and 2 singles. Renfrewshire won the foursomes 2 1/2-1/2 and the singles 5-1.
Eilidh, who reached the final of the Scottish women's amateur championship at Machrihanish and is the Renfrewshire champion beat Germany-based Rachael Taylor by 4 and 2. Scotland international and past Scottish champion Megan won by 3 and 2 over Susan Wood.
In the other match Ayrshire were also in cracking form. The host county beat Dunbartonshire and Argyll 7-2 after taking the morning foursomes 3-0.

Great Britain and Ireland won the Battle of the Titans - the only two teams with 100 per cent win records - to be hot favourites to retain the Astor Trophy match-play team title at Fairhaven Golf Club, Lytham St Annes tomorrow.
Skipper Tegwen Matthews' squad of five won by 4 1/2 to 2 1/2 against a New Zealand team who had won their previous three matches.
The position is that GB and Ireland and New Zealand both have three wins but the Kiwis have completed their four-match programme. Sunday is their rest day.
GB and I's Kelsey Macdonald, Pamela Pretswell, Kelly Tidy, Holly Clyburn and Amy Boulden go into battle for the last time when they meet Canada who have lost all three matches they have played so far.
Pamela Pretswell and Kelsey MacDonald lost their foursome matvh to Cecilia Cho and Lydia Ko 3 and 2 but they both won their singles matches.Pamela bt Emily Perry 6 and 5.
Posted by Jean at 20:58 No comments:

GB& I have second win in Astor Trophy

Great Britain and Ireland are on course for a title-deciding clash against New Zealand on Saturday in the Astor Trophy tournament at Fairhaven GC, Lancashire.
Both teams have won their first two matches. Great Britain slammed South Africa 6-1 today while pre-tournament favourites New Zealand won 5-2 against Canada who were playing for the first time this week.
GB & I won both foursomes and 4 of the 5 singles.
Pamela Pretswell and Kelsey MacDonald bt Kim Williams and Illiska Verwey 4 and 2.
Pamela made it 3-0 for GB and I by beating Tiffany Avern Taplin by 5 and 4.

GB & I win on First Day of Astor Trophy

New Zealand defeated South Africa 41/2 -21/2.
GB&I defeated Australia 5-2.
In the Foursomes Pamela Pretswell and Kelsey MacDonald halved with Benna Elliott and Ashley Ona.
In the Singles Pamela was under par in defeating Benna Elliott 4&3.
For full report go to Kirkwood Golf.
Posted by Jean at 20:57 No comments:

Pamela will play in the morning Foursomes and the afternoon singles against Australia tomorrow in the Astor Trophy matches. 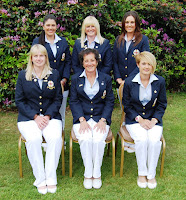 Pamela defeated in round 2

Pamela Pretswell defeated the number 3 seed Nathalie Mansoon (Sweden) in round 1 of the British Matchplay Championship at Royal Portrush today but was defeated 3 and1 by Marta Silva in the second round.
Posted by Jean at 17:57 No comments:

Pamela qualifies for Matchplay at British

Pamela Pretswell has qualified for the Matchplay round tomorrow at the British Championship at Royal Portrush Golf Club after qualifying rounds of 77 and 79.
Posted by Jean at 21:08 No comments:

Congratulations to Pat Hutton who won the West Vets Championship at Renfrew Golf Club today. She defeated Janette McCartney, Erskine, in the semi final and Jennifer Mack , Haggs Castle, in the final.
Posted by Jean at 11:42 No comments:

To view the Draw for the June Spoon Competition at East Kilbride Golf Club on Wednesday 8 June please click on the link below.
Caddies are still required for the Inter County Matches at Kilmarnock Barassie on 20, 21 and 22 June. Please add your name to the sheet on Wednesday or contact Anne Lloyd.
Posted by Jean at 18:17 No comments: 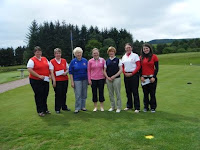 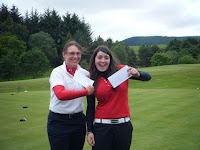 Well done Susan, Jenny, Lesley and Fiona
Posted by Jean at 17:51 No comments:

Congratulations to Pamela Pretswell who has again been chosen to represent Great Britain and Ireland against the Continent of Europe in the Vagliano Trophy Match at Royal Porthcawl, South Wales on 24th and 25th June.
Posted by Jean at 17:04 No comments: