Wishing everyone a happy new year. All the best and good golfing in 2013.

Wishing all our readers a very Merry Christmas

Germany-based Rachael Taylor, daughter of a Scots-born pro over there, has accepted a golf scholarship at the University of North Carolina State at Raleigh, North Carolina. She will enrol on January 7.
Airdrie-born Rachael has paid regular visits to Scotland over the years.
She won the Lanarkshire county championship in 2011 and was top seed for the match-play stages this past season but lost in the quarter-finals.
Rachael told Kirkwoodgolf in an E-mail:
"I am especially excited as North Carolina State are one of the top 20 teams in the (US college) nation. Theyreached the NCAA National Championships in 2012.
"Classes start on January 7. I will be spending Christmas in Scotland and New Year with friends in North Carolina."
Report by Colin Farquharson.

In a second round match at East Kilbride Moray Meechin and Gail Campbell defeated Aileen Woodland and Anne Cameron.
Posted by Jean at 18:47
Labels: Results

Some festive cheer at final Winter training of 2012 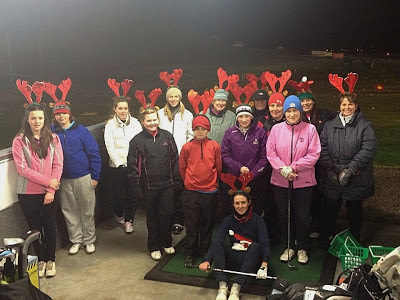 Jean Meikle and Margaret Allan are through to the third round.
Jean
Posted by Jean at 23:32
Labels: Results
Newer Posts Older Posts Home
Subscribe to: Posts (Atom)