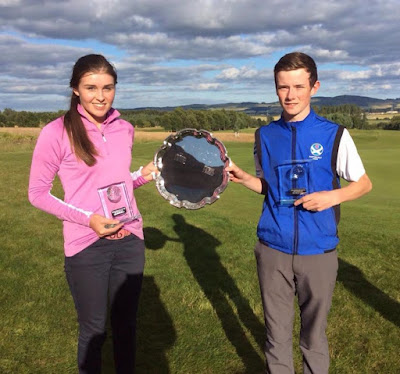 Congratulations to Kirsten Brown who won the Girls scratch Trophy at the Strathmore Junior Open Day yesterday with a gross 75 (CSS 74) and on winning second handicap at the Mackie Bowl on Sunday.

Blackjack Cup has been rescheduled

The Rescheduled Blackjack Cup will take place at Colville Park Golf Club on Monday 17th August . Tee times will be in the morning only starting at 10.00am. The link to the entry form is on the sidebar.Closing date is Friday 7th August.
The Morison Cup and Junior Championship will be arranged separately for those who entered originally.
Posted by Jean at 19:04
Labels: Fixtures

Your Country Needs You

Lanark Golf Club
5-7 August 2015
Please come along to support
your Lanarkshire Member
Molly Richmond
and the rest of the Scottish Team
or another team depending on
your nationality.
Posted by Jean at 18:13
Labels: Club News

To view the revise draw please click on the link below.
Revised Draw
Posted by Jean at 11:42
Labels: Fixtures 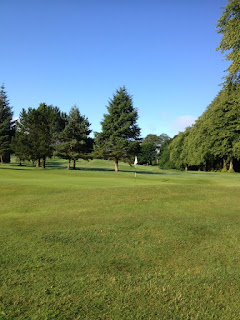 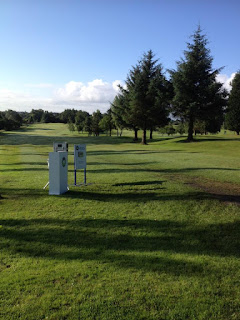 A number of our girls are competing in the Scottish  Junior Open Stroke Play  Championship for girls under 21 at Drumpellier Golf Club from today until Friday.  The leader after the first round is Cloe Frankish, Chart Hills Golf Club with a 69.
Lanarksshire first round scores:
Par 73, SS 74, CSS 74
Kirsten Brown    77
Ellie Bryce 94
Emily Glencorse 83
Eva O'Connor     79
Molly Richmond 81
Katie Scott  82
Posted by Jean at 21:49
Labels: Juniors

Draws for Morison and Blackjack Cups and Junior Championship

To view the draws for these competitions at Colville Park Golf Club on Monday 27th July please click on the link below. Note there have been changes to the draw since it was first published.
Draws
Posted by Jean at 13:04
Labels: Fixtures 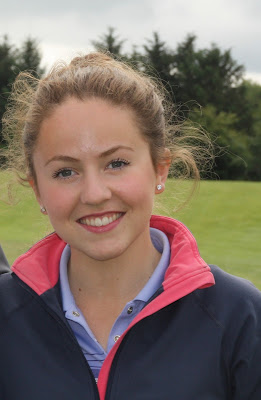 Posted by Jean at 15:48 No comments:
Labels: Juniors/Club News

Drumpellier Golf Club Ladies greensomes on Tuesday 11th August still has times available. Please book via out website www.drumpelliergolfclub.co.uk and go to visitors booking to reserve a spot! Play our great course for a small fee and chance of a wee prize too!!! Look forward to welcoming you!! Captain Susan
Posted by Jean at 14:04
Labels: Open Days 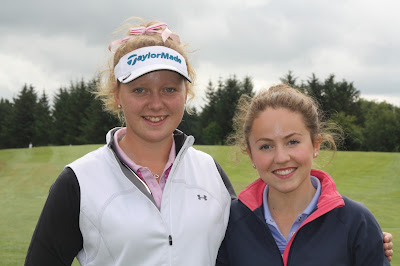 Molly with her semi final opponent Chloe Goadby
In an excellent final  in which Fiona Liddell defeated Chloe Goadby at the 20th. All holes between the 5th and the 20th were halved.
Ailsa Brannock from Castle Douglas won the Ansley Reid Salver.
Molly Richmond won a prize as a semi finalist.
Championship Prizewinners 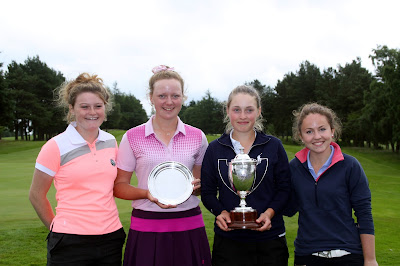 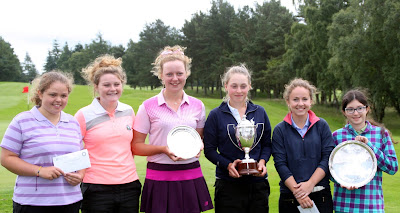 All prizewinners
Posted by Jean at 21:54
Labels: Juniors

After a very good game in which Molly played well and in which she was 1 up for part of the match Molly Richmond lost 2&1 to Chloe Goadby, the second qualifier.
Well done Molly. You played very well all week.
Posted by Jean at 13:14
Labels: Juniors

She outplayed her opponent over the first nine and was four up at the turn but MacGarvie fought back to square the match at 15, and went one up with a birdie at 16.
Molly rolled in a lovely putt on 18 to square the match and take it into extra holes.
At 19 she fired in a lovely approach, with her birdie putt just slipping past. Meantime MacGarvie's approach shot was just short of the green and she failed to get up and down to extend the match.
In Thursday morning's semi-finals, Molly will play the No 2 seed, Chloe Goadby (St Regulus) who won her quarter-final by 2 and 1 against Claire Robertson while McWilliam was a 2 and 1 winner against Jillian Farrell (Cardross).
Justine Fulton beat her first round opponent but lost in the second round to Eilidh Crawford. Katie was unfortunate to come up against a girl with a 32 handicsp who was playing to beneath her handicao and to whom she had to give 26 strokes. Katie lost 4 and 3.

In the Scottish Girls Close Championship at Alyth Golf Club today the leading qualifier was Fiona Liddell, Schloss Vornholz, who was last year's Champion with scores of 68, 71.
There were a number of good performances from our Lanarkshire girls
The top 16 qualify for the Championship Matchplay and the top 16 net scores, not already qualified, qualify to compete for the Ansley Reid Trophy.
The finishing  Lanarkshire scores and Placings were:
Par 72,SS 73 CSS Round 1 72  Round 2 72
T5   Molly Richmond 72, 78
T17 Eva O'Connor 79,79
T17 Katie Scott 79,79
T22 Kirsten Brown 80,82
41   Justine Fulton 89,92
Many congratulations to Molly who  qualified for the Matchplay Championship and to Katie Scott and Justine Fulton who qualified for the Ansley Reid matchplay.
To view the draws for these competitions click on the following link:
http://www.slga.co.uk/live-scoring.html

The closing date for entries for the Morison Cup, Blackjack Cup and Junior Championship at Colville Park GC on Monday 27 July is this Friday, 17th July.You can enter these competitions by downloading the entry forms from the sidebar.
Posted by Jean at 21:44
Labels: Fixtures

Kirsten Brown, Katie Scott Eva O'Connor Justine Fulton and Molly Richmond are competing in the Scottish Girls Championship at Alyth Golf Club which starts on Tuesday. We wish them well.
Posted by Jean at 21:27
Labels: Juniors 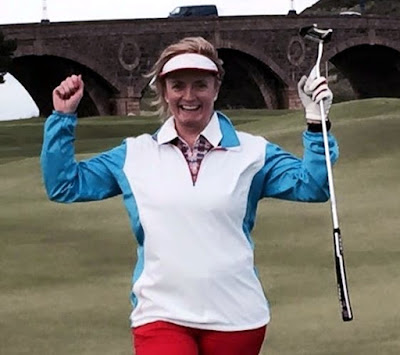 Congratulations to Lesley Watson who won the scratch competition at the Duff House Royal GC, Banff,5 day event by beating Heather Anderson of Blairgrowie at the 19th in the final. 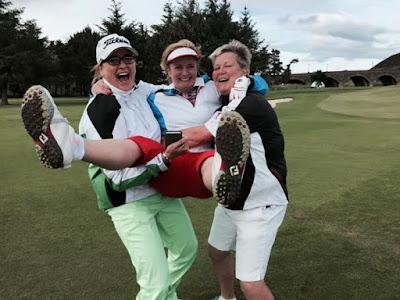 The Entry Form for the Tri Am at Cambuslang Golf Club on Friday Morning 7th August is now on the sidebar. Teams will be made up and the draw published on the website after the closing date of 28 July.
Posted by Jean at 15:18
Labels: Fixtures

Congratulations to Lesley Lloyd who has been selected for the Scottish Team for  the Veteran Ladies Golf Association Jamboree to be held at Sherwood Forest Golf Club, Nottingham from 4th - 6th August.
The team is:
Team Captain - Noreen Fenton
Vice Captain - Kathleen Sutherland 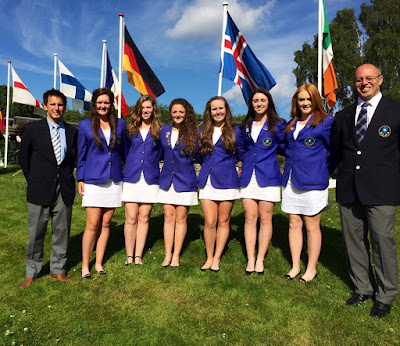 Rachael is a member of the Scottish team which reached the semi-finals in Flight B of the European women's team championship by beating Slovenia 3-2 in Helsinger, Denmark yesterday.


Rachael Walker and Clara Young won the foursomes tie by 1 hole.
Rachael Taylor and Jess Meek both won their singles by one hole, victories that were crucial for the Scots to advance.
Connie Jaffrey lost by 2 and 1 while Heather Munro lost by 7 and 5.
Posted by Jean at 18:48
Labels: Club News/ Rachael Taylor

If you entered for this Championship in May and want to enter for the rescheduled Championship on Sunday 13th September you do not need to fill in another entry form but you must send a text to Fiona to let her  know.( telephone 0781 578 4404.)
If you did not enter in May to enter please download an entry form by clicking on the link below.
West Championship Entry Form
Posted by Jean at 18:51
Labels: Fixtures

There are still places available for Lanark Open Day on Sunday 12th July between 10.00am - 2.00pm.  It is a better ball competition.  Please enter with a partner online at lanarkgolfclub.co.UK. Proceeds to Beatson Cancer Charity.
Posted by Jean at 19:58
Labels: Open Days
Newer Posts Older Posts Home
Subscribe to: Posts (Atom)