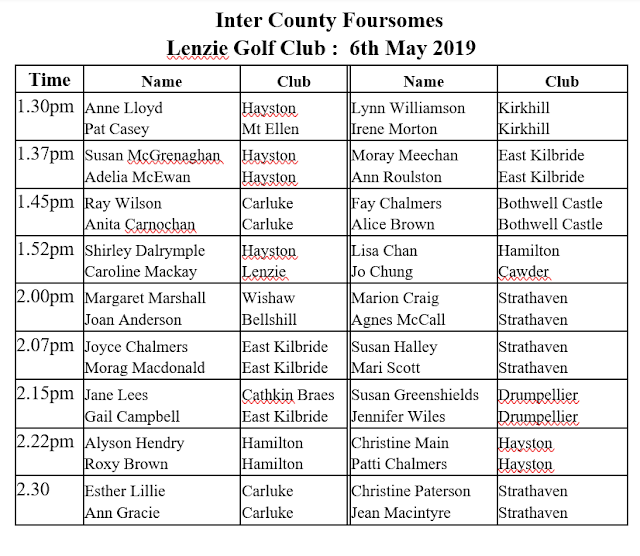 Posted by Jean at 21:32
Labels: Fixtures 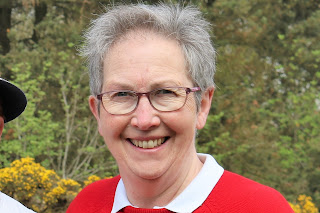 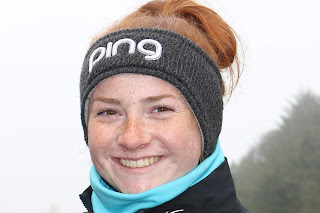 Posted by Jean at 17:19
Labels: Championships

Championship Qualifiers for Tomorrow's Matchplay Round 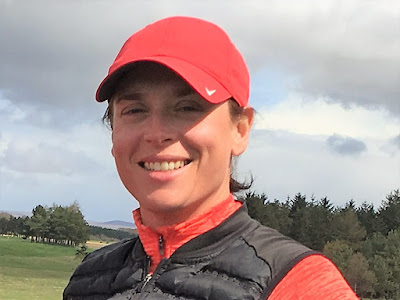 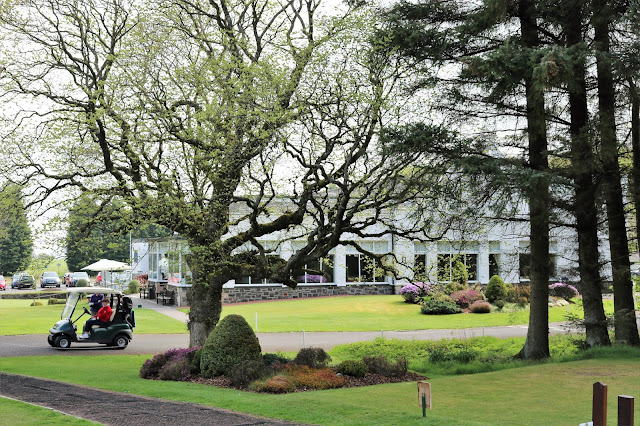 The Championship Qualifying round today started in cold foggy conditions but after the sun broke through  it was a lovely day for golf.
To view photographs of the competitors please click on the link below.
Championship Competitors

Posted by Jean at 15:29
Labels: Championship

The entry form for the May Spoon at Carnwath GC on Sunday 26th May from 1.30PM is on sidebar. This is also the Spoon Final for those who won spoons in 2018.
Posted by Jean at 20:22
Labels: Fixtures

1The Competitions are open to boys and girls who are under 18 years of age on 1st January 2019 , are members of an LGA affiliated club and have a CONGU handicap.
2 There will be Order of Merit competitions in the following category for girls: under 18 girls handicap.
3. OOM points will be awarded to the top 5 finishers in each OOM competition as follows:
50, 40, 30, 20, 10
Double points will be awarded at both the LGA County Boys and Girls strokeplay Championship and on OOM Finals Day.
4. The winners of the OOM categories will be the Junior with the most points accumulated in their best 4 tournaments (ones with most points gained) prior to Finals Day giving the best 5 points totals.
Posted by Jean at 19:50
Labels: Juniors

LANARKSHIRE GOLF ASSOCIATION JUNIOR FLAG & STABLEFORD CHALLENGE Lanarkshire Golf Association (LGA) are working in conjunction with the Junior Flag Challenge (JFC) 2019 Tour and will be holding a FREE event at Playsport in East Kilbride on Monday 6th May 2019,starting at 12 Noon. This is a Bank Holiday and the schools are off. Please note that this is the re-arranged date for the event that was cancelled on 9.3.19 due to the adverse weather conditions. All previous entrants will be invited in due course to play again . It is open to boys and girls aged 5-16 years and you DO NOT need to be a member of a golf club to play! To enter this FREE,FUN event and to get more information,please go to www.juniorflagchallenge.co.uk/lanarkshire Boys and girls who haven’t tried golf,beginners and handicap golfers are all welcome and prizes will be on offer!🏆 We will be running a Flag Event for beginners and a 9 Hole Stableford competition for golfers with a handicap.🏌️‍♂️🏌️‍♀️ We will have representatives from golf clubs throughout Lanarkshire at the event and any parents thinking of getting their child to join a golf club can get more information on the day. The JFC Tour is an excellent tour for golfers who are not quite ready to play on the LGA Junior Tour,although many of the boys and girls will be playing both tours this summer! Kenny McLean Lanarkshire Golf Association Junior Convenor
Posted by Jean at 22:26
Labels: Juniors

The draw may change on the day and so please arrive early as  your time may change.
The  county mobile No 0778 344 5706  will only be manned on the day. Before then if you have a question or need to cancel please contact Anne Lloyd.

Posted by Jean at 20:35
Labels: Fixtures

To view and to book all Open Days being held at Hayston Golf Club this year please click on the link below
https://www.brsgolf.com/hayston/opens_home.php
Posted by Jean at 22:34
Labels: Open Days

Megan is competing in Scottish Girls

Megan Docherty is competing in the Scottish Girls Open Championship at the Eden Course, St Andrews, this week.
In the first round today Megan scored 80 and lies in joint 80th place out of 120 competitors.
Hannah Darling, Broomieknowe GC, is leading with a 4 under par 67.
Posted by Jean at 22:24 No comments:

An entry form for the West Championship at Sandyhills GC on 19th May from 1.00 to 2.30pm can be obtained by clicking on the links below. Please read the printable form to read the rules. If you choose to enter online you can either send a cheque or pay by BACS transfer. I will send you the details once you have entered.

Please note the handicap limit has been raised to 20 this year.

Posted by Jean at 20:01
Labels: Fixtures

Congratulations to the Scottish Vets Team 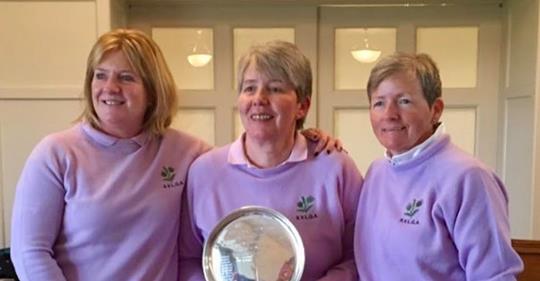 Many Congratulations to the Scottish Vets Team which defeated the Irish Senior Ladies at Troon Portland on Sunday and Monday to win the Mary McKenna Trophy The Scottish Vets lead by 2 points after the first day. The match finished 6.5 to 5.5 .
The following special mention was made of Lanarkshire member, Lesley Lloyd, by the Scottish Captain, Ellie Whyte,
Over the two days, everyone played a vital part in this win but it would be remiss of us not to mention that Lesley halved her match after being 2 down with 2 to play, against Carol, who is considered one of the strongest Irish players. So if you spend your time trying to hit the ball further - stop now and practise your short game. Lesley’s accuracy round the greens was key.
Results:

The link to the entry form  for the Inter County Foursomes Qualifying Round at Lenzie Golf Club on Monday 6th May from 1.30pm is now on the sidebar.
Posted by Jean at 22:10
Labels: Fixtures, Winter Foursomes
Newer Posts Older Posts Home
Subscribe to: Posts (Atom)