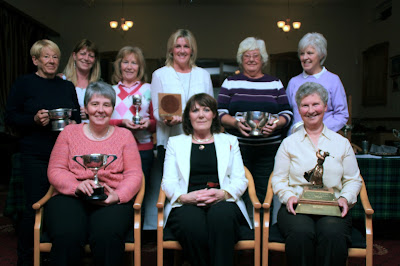 Some of last night's prizewinners

The AGM of LLCGA was held last night at Cambuslang Golf Club. There was a good turn out in spite of the poor weather conditions although a number of prizewinners were unable to attend. The meeting started on a sad note while we remembered the following members with a one minute silence:
In February Ellen McCormack   died in the nursing home where she lived. Ellen was a former member of Cawder Golf Club. In the past when she was able to play she supported county events well and any competitions that her sister Past Captain Betty McCormack was involved in.
In April we lost Dor Rutherford of Lenzie, a popular and much respected Honorary Member of the County. Dor was Captain from 1971-1973 and President from 1999-2004 and was an ever present supporter at Championships and Jamborees until 4 years ago when her health prevented her from doing so.
In September the death occurred of Beatrice Howieson, a former member of Cawder Golf Club and of the County. She, like Dor, was in her nineties and lived in a nursing home for the past five years but in the past was a very active county member and was a regular caddy for the team. She also did much for Junior Golf especially as President of the West of Scotland Girls.
In October we were shocked by the untimely death of Helen Heggie. Helen was a Past Captain of Sandyhills and a member of Drumpellier. She was a very active member of the county winning the Coronation Medal in 1995 and the Stevenson Trophy in 2004. She made a particularly valuable contribution to the County as Honorary Secretary for seven years from 1998-2004. In recent years arthritis reduced her ability to play but she maintained her interest in the County and in golf  and was handicap secretary for all sections of Sandyhills.

We were very shocked by the death of 20 year old Heather Neilson who had just started her first year at University. Heather, a member and champion of Greenburn and team member of West Linton was a Junior Member of the County for five years and a full member last year. She was a delightful girl who loved her golf and competed in many Lanarkshire and Scottish events in spite of having a heart problem from birth.  She attended development coaching and winter training. She was a member of two winning Kennedy Salver teams and of the 2013 winning Junior team in the West of Scotland Championships and she won the Junior Championship Salver in 2011.

The new captain, Roxy Brown, and vice captain, Alyson Hendry, were installed as was the new President, Pat Hutton. 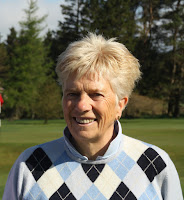 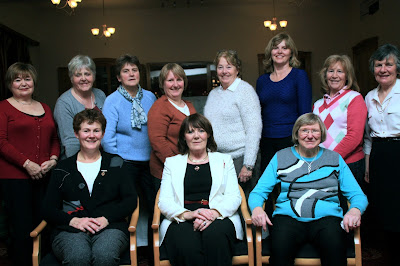