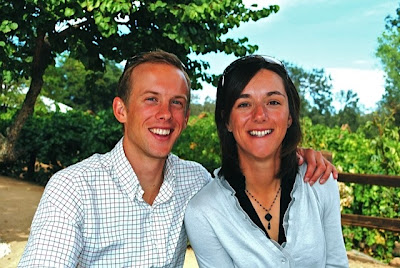 Anne Walker and husband Chris
Anne Walker, a former LLCGA and Strathaven member is beginning her first season at Stanford University, California.
She was appointed head women's golf team coach in July following the resignation of Caroline O'Connor who had held the post for 17 years.
Another Scot, Kathryn (Marshall) Imrie from Monifieth is the Stanford assistant women's coach.
"We are very excited to have Anne Walker join us as the new coach of the Stanford Women's Golf Team," said Director of Athletics Patrick Dunkley."Anne possesses an enthusiasm for the sport of golf and the student-athlete experience as well as an understanding of the mission, vision and values of Stanford Athletics.
"I look forward to working with Anne and to seeing the success she will bring to the golf program."
Walker comes to Stanford from UC Davis where she was the head golf coach for four years. She led the Aggies from their transition from NCAA Division II to being competitive at the national level in NCAA Division I. For full report on Kirkwood Go;f click here
Anne was married in August.