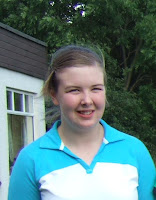 Louise Fleming, a member of Strathaven Golf Club and LLCGA, won the Bronze Division of the SLGA Regional Medal Final- West Division at East Kilbride Golf Club today in which 100 competed. She had a 4 under par 69, 5 under the CSS of 74 to win by 5 strokes. She qualifies to play in the Grand Final at Crieff on 5 September.

In the silver division Joyce Chalmers, East Kilbride finished in third place with a 71, beaten for a qualifying second place by a better inward half.
Posted by Jean at 21:22